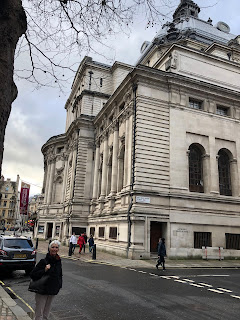 Our visit to Methodist Central Hall, Westminster, took place on a Sunday when no trains were running from Amersham!  So, we drove over to West Ruislip and picked up the Central Line there.  It’s an odd feeling travelling into London early on a Sunday morning; us making our way to church wondering where everyone else is going!

Central Hall stands opposite Westminster Abbey and was opened in 1912. 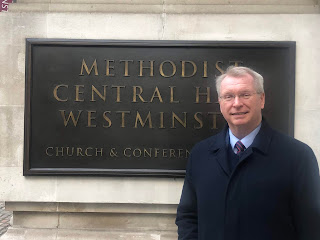 I’ve been there many times for conferences and assemblies, but this was my first visit for ‘Methodist’ worship. 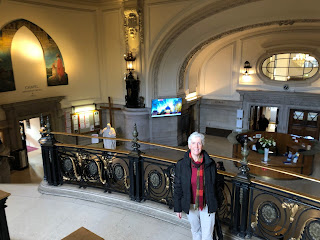 It doesn’t really look like a church; indeed, the impressive central staircase is modelled on the one at the Paris Opera House.  It was deliberately built to look like a conference centre; to be a welcoming and inclusive space for everyone, regardless of faith. 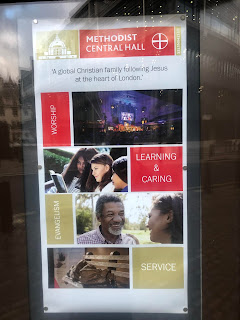 On Sunday mornings the worship takes place in The Great Hall on the first floor, which seats, with the balcony some 2,400.  On Sunday I suspect there were more like 200 of us, yet it didn’t feel empty.  The balcony isn’t used, and the stage brings forward those leading the worship so that there is a comfortable intimacy between platform and congregation. 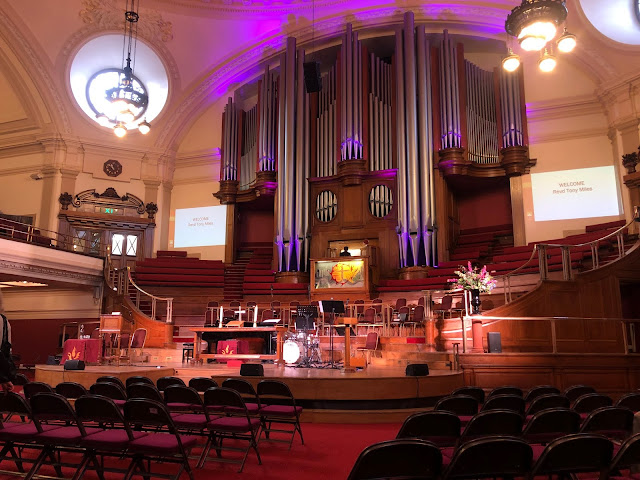 Sunday’s music consisted of a splendid organ, played by an equally splendid organist, a robed choir of some 17 voices, a pianist, drummer and trumpeter!  This eclectic blend was of the highest standard, all overseen by Gerard Brooks, the church’s current Director of Music who is also The President of The Royal College of Organists at the moment. 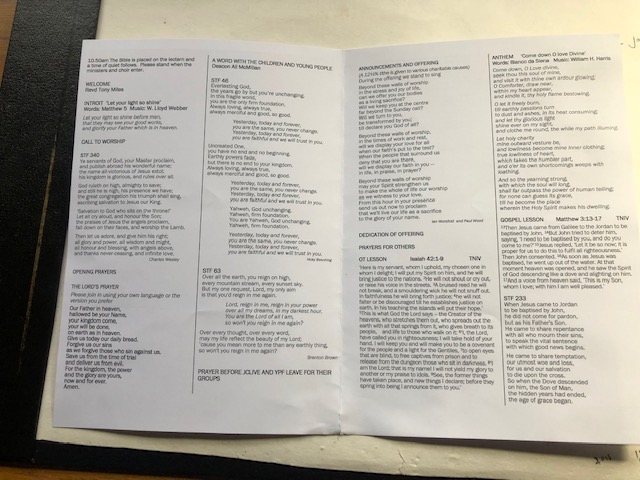 We started with a Wesley hymn: Ye servants of God, and then the service followed a typical non-conformist pattern.  Much of it was led by The Revd Tony Miles, who is soon to take over as Superintendent Minister, assisted by a young woman Deacon, Ali McMillan, who gave the children’s address and led the intercessions.

The choir sang an introit by W.Lloyd Webber, father of the famous ‘Andrew’, and one time organist of Central Hall! 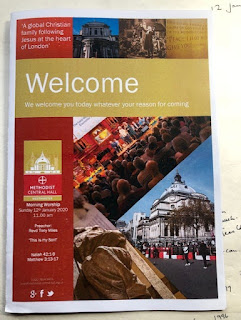 The sermon, based on The Baptism of Christ, focused on love and being loved.  It was followed by an immensely poignant hymn by the modern hymn writer Michael Foster entitled Let love be real.  We’ll be singing it soon at AFC!! 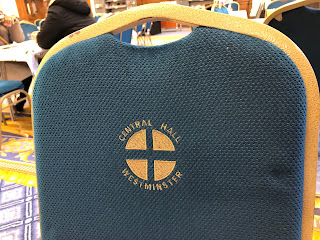 As we arrived at church we were greeted with such warmth and showed to the room where coffee is served both before and after the service.  People came over and chatted to us immediately – seeming genuinely pleased we were there!

The congregation at Central Hall is truly multi- cultural.  We were told that many of the worshippers have family back in Ghana and Nigeria, places where Methodism is, even now, very strong. 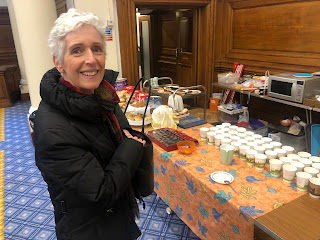 As with our visit to Pont Street last month, we realised that almost everyone had travelled in to the service.  We spoke to someone from Reading and another from Southend.  There is great commitment in these central London congregations.
Central Hall stands opposite Westminster Abbey and was opened in 1912.

In 2002, when the Midland Bank vacated part of the ground floor of Central Hall, a beautiful ‘Chapel’, seating 180, was built, enabling the congregation to have dedicated space for both Sunday evenings and weekdays, even when the rest of the building is being hired out for conference users. Surprisingly, many activities were listed for midweek on the notice sheet.  This is not just a Sundays only congregation!  One of the most encouraging was a group called ‘Sanctuary, which welcomes some 20 young adults for an informal midweek service in the Chapel.


I don’t think either of us will forget the wonderful ‘buzz’ in the coffee room after service.  Way over 100 people stayed sitting at tables, with a great ethnic mix, chatting and catching up.  You could feel the love and sincerity of these people, a community that brings warmth and integrity to central London.

We came away feeling so encouraged and buoyed up.  The welcome we received was brilliant and the sense of God’s presence truly palpable. 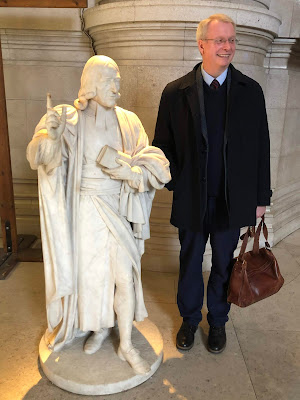 Oh, and by the way, Wesley’s Café in the basement did a very nice beef stroganoff for lunch!

Our day in London ended with a 5pm service at St Martin in the Fields just by Trafalgar Square.

I often attend this church but nearly always that’s on a Thursday lunchtime for Great Sacred Music with St Martin’s Voices.  The Voices are ‘professional’ singers who work at St Martin’s a couple of times a week leading the mid-day and early evening services. Each Thursday, Dr Sam Wells, the Vicar, weaves a theme through five anthems sung by the Voices and two hymns sung by the congregation.  For me, over the last few years, this Thursday lunchtime appointment has been a wonderful ‘wellspring’ which I’ve really appreciated.

However, Sunday was different in that we were attending an Advent Carol Service led by the choir, not the Voices.  The choir is much bigger and the service much more formal that Thursdays.

Advent Carol Services have become popular recently.  They are similar to the traditional Carol Services at the end of Advent but are held on the first Sunday of the four-week cycle.  At St Martin’s the theme for the service was ‘Light’ with readings and anthems speaking of God’s light piercing our darkness.

I’m beginning to realise, as a visitor to churches, just how important church websites are.  For both services we attended on Sunday we gleaned all we needed to know about preparing for our visits from their websites.  St Martin’s told us the Advent Carol Service would be popular so come early, the doors would open at 4.15pm for a 5.00pm start.  We got there early and had a good seat and sure enough by 5.00pm the church was comfortable full downstairs.  And that’s great isn’t it?  That in our day and age a church like St Martin’s, in the middle of a busy and sometimes ‘aggressive’ cosmopolitan city can still attract a couple of hundred people to an afternoon service on a cold December day to hear God’s promise that darkness will not overcome the light!

The music of the afternoon was of the highest possible quality.  The sermon was theologically challenging! One thing we noticed was that often people don’t join in with the hymns these days.  Even though we were surrounded by others we heard our own voices – which may not have been a good thing!

So ended a fascinating day in London – a really good day.

I was struck just how odd it seemed having a whole weekend!  Normally when that happens it’s because I’m on holiday and there’s a week to come.  But last week it was a real treat to have both Saturday and Sunday clear before returning to work on Monday – that’s just not normal for ministers, but I think I could get used to it!! 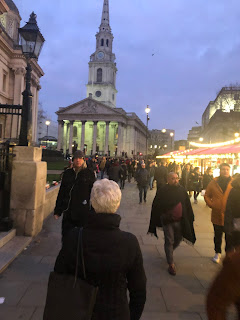 On Sunday 1st December 2019 (appropriately the first Sunday of the new Church Year: Advent 1) I started a rather unusual Sabbatical.  Instead of taking the traditional three-month period away from church life, I’ve opted, instead, to have about twelve Sundays ‘off’ over the coming months.  My task, after thirty-two years of standing in a pulpit most weeks, is to attend various churches as a worshipper. To learn again what it feels like to encounter a service not as its planner but as a participant – to get a view from the pew!

So, on Sunday we took the Tube from Amersham to Knightsbridge and walked behind Harrods to the imposing white building that is St Columba’s, Church of Scotland.

We were given a warm greeting by a friendly steward at the door and she indicated the sanctuary was upstairs.  The building felt familiar almost straight away.  It had that simplicity, yet dignity, I’ve always associated with Presbyterian and Free Churches – an atmosphere not dissimilar to that of Amersham Free Church.


The service was to include the baptism of three children, so some family groups were coming together in the front pews.  Members and friends were greeting each other – one gentleman resplendent in a kilt!

We were handed a printed order of service with notices.  Some church officials wore badges and I found this quite reassuring as it felt to me as if they were taking the act of welcome seriously and thoughtfully.


After five minutes of splendid  organ music the service began with the Beedle proceeding the minister, The Revd Angus MacLeod, up the aisle carrying a bible.

The service was easy to follow because the instructions were so clear.  The Revd MacLeod led the worship with much good humour, grace and dignity.  His sermon was engaging and intelligent and something of his deep and sincere faith was warmly communicated. The professional choir of just six voices sang beautifully.

After the service we made our way downstairs, firstly for coffee and then for lunch.  St Columba’s provide lunch every Sunday!  We enjoyed a roastbeef meal for just £3.50!  Apparently, there are nine teams serving in rotation week by week.  By chance we sat next to a lovely lady who serves as an elder of the church who knows the Reid family back in Amersham – so we had much to talk about!  She told us that basically everyone, apart from the Minister, travels in to Pont Street from the outskirts of London.


We left after lunch with a glad heart.  We had encountered such lovely and sincere people and such a warm-hearted minister and both of us were in no doubt that if we lived nearer this is the sort of church we would be privileged to belong to.

Our visit to Methodist Central Hall, Westminster, took place on a Sunday when no trains were running from Amersham!  So, we dr...